Last week, there was a nice warm afternoon and I asked the kids what they wanted to do.  I expected to hear “Play outside” or “Play hockey” but Jack suggested going to the zoo.  I was tired and I knew that if I hung around the house nothing would get done anyway, so going to the zoo sounded like a great idea…a real excuse for getting nothing done.

Before we could get out the door, I had to make Jack eat lunch.  While I was doing that, I got a phone call from a high school friend.  As we were chatting, Jack and Casey were doing their own type of chatting that was more like bickering.  Jack was slowing eating his lunch while Casey had already devoured hers.  It was taking Jack a while to eat because he kept getting out of his chair to growl at Casey who was (innocently, I’m sure) playing with her baby.  She started crying and said, “Jack’s trying to eat my baby.”  And so the next thing that comes out of my mouth (as I’m still on the phone) is, “Jack is not going to eat your baby!”  I’m sure it’s a rational fear every girl has of her growling brother.

At that point, I was second guessing whether I wanted to take these squabbling kids to the zoo.  I didn’t want to bring any strollers and Casey was already whining about that.  But I finally ushered them to the car with water bottles and snacks and off we went.

It turned out to be so great.  They took turns picking which part of the park they wanted to go to next.  There were a lot of animals out and about.  There was no fighting.  They both walked the whole time and there wasn’t a single complaint.  It was just one of those afternoons where I truly enjoyed spending time with my kids and seeing the zoo from their point of view.

We also saw giraffes trying to mate…can’t really top that.  Well, actually the male giraffe desperately wanted to top that but she was playing hard to get.  At least that prevented anything more than a male anatomy discussion.

I wish I’d had my good camera with me, but the phone pics aren’t that bad.  Snakes, new red shoes (accidental picture), sibling love, several wooden cutouts to stick your head in and more sibling love.  On a sixty degree day in the middle of January.  Mating giraffes.  What’s not to love?  (Except I have no pictures of mating giraffes…I was too distracted to take pics I guess.) 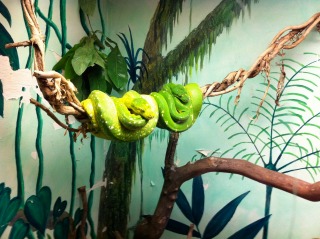 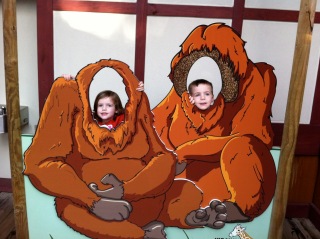 Today Jack started Zoo Camp.  It’s a week long camp at the zoo from 9-12 every morning and the theme is A, B and on to Z:  From Antelopes to Zebras, the Zoo ABCs.

The day started off as poorly as it could, for Jack anyway.  He was up late last night and before he went to bed, he said, “I want to sleep in later than Casey tomorrow.  So don’t wake me up.  I want to sleep.”  I said okay and went along with this, figuring he’d be up at 6am.  He rarely sleeps later than Casey.  However,  I had to wake up both Jack and Casey in order to get to zoo camp by 9am.

I had already showered and prepared everything for camp.  I put their cereal in plastic bags for the car.  Water bottles, hats, suntan lotion, shoes…everything was in the car and ready to go.  Everything except Jack.  He didn’t want to get out of bed, he didn’t want to get dressed, he wanted to eat breakfast at home, he didn’t want to go to zoo camp.  I *patiently* got him dressed and into the car, even bringing the requested bowls so he could have his cereal in a bowl.  (They forgo the milk with their cereal anyway.)  But oh, I didn’t have a spoon for him and this was so traumatizing that he wanted me to go back to the house and get him one.  I did not.  Crying ensued.

I had an Odwalla Bar that interested him and he started eating that and then started eating his cereal.  Except he wasn’t finished with his cereal by the time we got to the zoo and he was soooo hungry.  We had a few minutes to spare so he was able to finish his cereal while I slathered on sunscreen.

We met Mr. Street, Jack’s teacher – that’s his first name and it’s his real name and he mentioned it a couple times.  Jack prefers, “the man.”   When it was time for me to leave and for Jack to go into the classroom, he didn’t want to let go of my hand.  I don’t know who felt more awkward, Jack or I, as I dragged him into the classroom.  The other boys and girls were introducing themselves.  I finally convinced Jack to go take a seat.  I heard him introduce himself – his name was Jack and it started with J.  And then he didn’t look back so Casey & I snuck out the door.  I felt horrible and wondered if I should stick around, but I figured he would be alright.

Casey and I went grocery shopping and it was so nice with only one child.  Normally she is the problem-causer in the grocery cart, but with no one else to hit or lay on or bite, she was delightful.  We zipped through the store in no time and it was a nice glimpse of the future, when Jack is in school.

I checked my phone more than I ever do, just in case there was a phone call about Jack but the lines were quiet.  We headed back to the zoo to see what the verdict was going to be about zoo camp.  I was so glad to see the big grin on his face when he saw me waiting for him…the big grin that meant he’d had a good time and had so many things to show me and tell me.  And he’s looking forward to going back tomorrow!