Last week, we were driving somewhere and it was dark.  I don’t even remember where we were going but we really don’t leave the house much after dark so it made Casey comment about all the pretty lights.  She wanted to know if there were pretty lights all over the world like this.  I told her there aren’t this many streetlights all over the world…places like where Grammie & Grampie live in Maine don’t have many lights.

This developed into a conversation about the fact that there aren’t many houses by Grammie & Grampie’s house because the two buildings on either side of their house are not houses.  One is my dad’s extra garage.  It used to be a fire station and it is still fire station red.  Jack wanted to know why there were desks and chairs in the upstairs of the fire station and I told him that it used to be a school house before that.  They were kind of fascinated by that for a minute or two and then backtracked a little bit.
Jack said, “There was a fire station when we went to that nut party.”  What?  Nut party?  I had no idea what he was talking about but I hoped I hadn’t missed out on a fun-sounding party.  A nut party and a fire station?  After I composed myself I asked him what he was talking about.  “You know, that one at the school where we used peanuts and then we got to pick out prizes at the end?”
Ohhh.  It made sense to me at that point.  It was called the Peanut Fair and it is part of the International Festival when we visit Maine in the summers.  We pay a couple dollars for a bag of peanuts and the kids go around and pay a peanut for each game they want to play.  After they play the game they get a coin or two and at the end they “buy” prizes with their coins.  It’s a pretty fun time for the kids.
And yet there is no fire station near across the street from the elementary school where the Peanut Fair was held.  There is a big garage across the street that kind of looks like a fire station.  And that just makes me marvel at Jack’s memory.  The fact that he remembered some random building in Maine that looked like a fire station to him and then brought it up six months later.
And because I didn’t post any pictures of the peanut fair this summer, I might as well do it now. 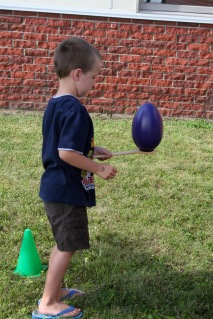