Casey turned 3 yesterday!  I was telling Pat that I can vividly remember almost everything about the morning she was born.  Hard to believe that was 3 years ago.

After the big festivities of the weekend, Casey’s birthday was pretty low key, but we had a nice day.  Pat had duty so he gave her the big birthday gift on Wednesday night.  Casey now has a big two-wheel bike with training wheels like Jack’s.  Her reaction to getting the bike was funny.  She just sat there and kind of laughed uncertainly for about 5 minutes.  Then we went outside for the last few minutes of daylight.  She hopped on the bike and rode it like she’s been on it for a year already.  She and Jack cruised around the cul-de-sacs and then parked them away for the night.

We were up bright and early yesterday and outside on our bikes by 8am.  (First they insisted I take a picture of them hugging though…not sure what’s up with that.)  I am so glad that we had weather where we could do that.  It seems a little risky to be buying a bike in February and expecting to be able to ride it but lucky and blessed we have been with beautiful weather the past couple days. 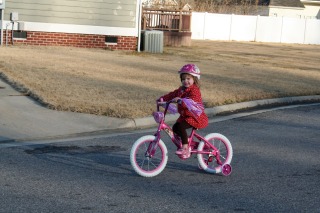 After dropping Jack off at school and going to the gym, I took Casey on a little trip to Toys’r’Us.  I let her pick out a couple things for her birthday.  (I had never been to a Toys’r’Us until I had kids.)  We looked at all the princess stuff and the babies and the ponies and all things pink.  I was hoping we would find something a little different from what we already had though.  Luckily she found a pink guitar and decided that’s what she wanted.  And then we found the umbrella section and she was so excited about an umbrella.  She walked around the store with it and out to the car.  She can’t wait for it to rain. 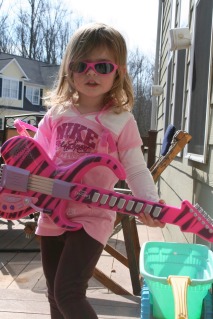 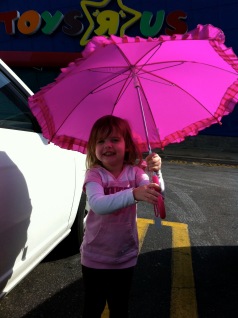 After an unsuccesful attempt at getting Casey to nap, we opened her presents from Maine and a couple other little things I got her. 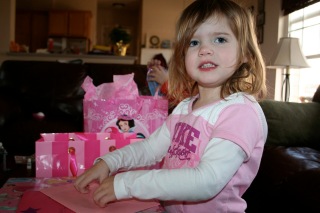 She was very excited about getting her own scissors… 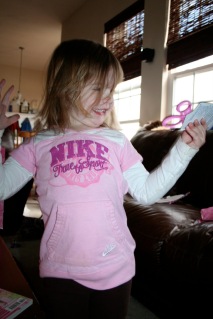 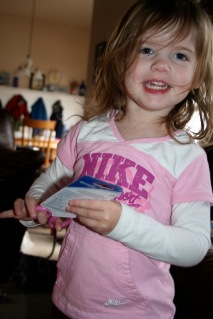 No cake, but we had some girl scout cookies to round out the day.  She was a pretty happy birthday girl and went to sleep in her new Princess sleeping bag.