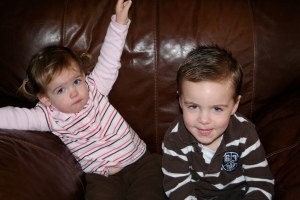 Christmas Eve morning…just before going to get Grammie & Grampie at the airport. I took pictures because these are Casey’s first piggy tails. They lasted for approximately 12 minutes. (I didn’t have the right elastics…not that the right ones probably would have stopped her from pulling them out.) 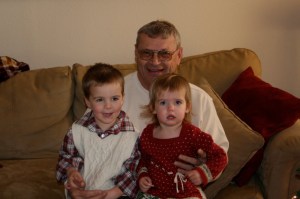 Grampie with Jack and Casey before church. I’m proud that I didn’t really plan our outfits but we were all pretty coordinated. Unfortunately there is no family shot. We were running a little late for church and like last year, we arrived two minutes after all the seats were taken. 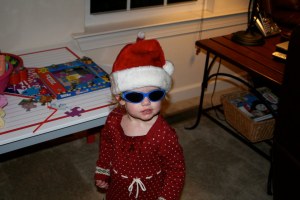 Casey chills in a Santa hat and sunglasses while we get dinner ready. We had cocktail meatballs and then lasagna. I set the lasagna out on the counter while we were at church and Tugger helped herself to half of it. Luckily we salvaged the other half and had a good dinner.

Jack opening his Christmas eve presents…this bag has his ornament for 2009. Pat went to about 15 stores looking for a Thomas the Train ornament.

Casey with her Christmas Eve presents.

Jack and Casey in their new pajamas putting their new ornaments on the tree. Casey’s was Cinderella in her carriage. Three of the wheels were broken off it in the first five minutes and it never made it to the tree. Casey took it to bed with her instead and now it is a wheel-less carriage. At least she liked it. And I need to remember to get some superglue before next year.

All that lasagna tired Tugger out.

While the children were nestled all snug in their beds, it only took Santa’s helpers a couple hours to put this together on Christmas Eve. Jack literally ran to his bed and was asleep within minutes so that Santa would come. It was the easiest bedtime ever. He wanted to run no risk of Santa not coming because he was awake or of seeing Santa.

Casey’s presents from Santa. Auntie Jenn got her the cute chair.

Jack likes his new hockey sticks. I like them too because they are longer and I don’t have to play hockey with him on my knees.

Casey wanted to open all her presents in her chair.

She also figured out unique ways of getting in and out of it. 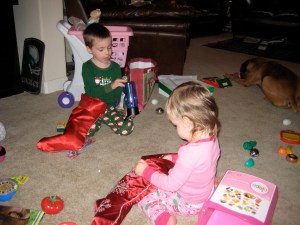 Stocking time. Santa also brought silver bells for everyone. After reading The Polar Express, Jack really wanted Santa to bring a silver bell. It was not so easy for “Santa” to find one and when he finally did, he had to buy 12 and then walk around the mall with them jingling and jangling. 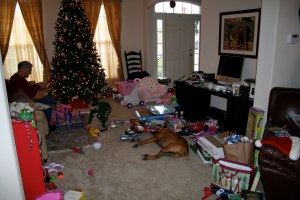 The aftermath. I love the dog in the middle of it looking so exhausted. It was tough work for her to watch everyone open presents. Or maybe it was her new chew toy that tired her out.
What a fun Christmas. Jack and Casey love their kitchen and do a lot of cooking for me. Casey got dolls and princess shoes, jewelry and a tutu along with her shopping cart & chair. Jack asks a dozen times a day to play hockey on the “ice” in our entryway. I spend a quite a bit of time rebuilding Lego machines for Jack that Casey has ripped apart. Jack also got Cranky the Crane for his train table and a computer that hooks up to ours. And, stay tuned for a dueling vacuums video…Jack and Casey each have their own toy vacuum. If only they actually picked up dirt!
A new post below too! Two posts in one day…a productive new year already.